White Chicken Chili is a perfect hearty dish begging to be simmered in a cast-iron Dutch oven. With a thick creamy base, beans, and peppers it’s a mild blend of spice and pulled chicken to feed the family over the campfire or at home. This version has charred corn and sliced jalapenos for a little extra pop that everyone loves!

Creamy, thick, comforting, and incredibly hearty. Is there a more perfect recipe for a chilly night around the campfire? This white chicken chili is just that with a bit of heat, but not too much, and the perfect balance and blend of flavors.

It’s a go-to in big batches for long camp trips, as it’s easy to make ahead and warm as needed. I’ve never known a camper to turn this down after a long day exploring the trails.

If you don’t have a campfire built, it can be made on a traditional range, or camp stove, and is perfect even if you aren’t getting somewhere off grid, but just want a comforting meal at home.

What is in Dutch Oven White Chicken Chili

You can spice it up with hot sauce or chili powder if you like, but I keep it mild and add jalapenos at the end for my own kick.

This is an easy recipe, even if you’re cooking over fire. You start by roasting some poblanos to create a rich flavor and remove the outer skin.

Then preheat your dutch oven over the coals and brown the chicken on all sides while sauteeing the onion. Finally, you start tossing it all together, the garlic, roasted chopped peppers, and spices to coat it all.

Carefully whisk in the broth, and deglaze the pan. Which simple means to scrape up any bits that were stuck to the bottom before adding the remaining ingredients in and bringing to a simmer.

A quick shredding of the chicken outside of the stew, and a puree on at the end thickens the base and makes everything creamy without adding any dairy. Toss the shredded chicken back in and then serve with all the toppings you want.

What the heck is Deglazing?

Deglazing works when a small amount of liquid is added to the pan and the steam created helps the built-on stuff come loose. That built on ‘stuff’ is usually pretty tasty at this stage and is a great flavor base, but using the steam method later for cleaning burnt-on stuff – aka not tasty – is also a pro trick. Tuck that one away to woo someone with your mad kitchen skills someday.

GirlCarnivore Pro Tip: Thicken white chicken chili by blending the bean heavy stew with an immersion blender. To add extra thickness, I add a few tortillas to the stew to simmer before I blend. No immersion blender? use a food processor or traditional blender with the lid securely in place and towel over top for safety.

Tips and Tricks for this Dutch Oven Recipe

Chilis are best when they are able to simmer low and slow, letting the layers of flavor mingle. There is truth to ‘chili is better on day two.’ Make this in the morning at camp, or even before getting to camp for more flavor ahead of time.

This recipe freezes well! Make ahead and freeze leftovers in airtight resealable bags or containers for up to 3 months. Reheat by thawing the stew and adding to a pot over low heat.

Put single portions in each freezer packet so that you have access to easy pre-portioned meals for busy days.

Want more savory recipe inspiration? Try some of my favorites!

If you’ve tried my Dutch Oven White Chicken Chili Recipe or any other recipe on GirlCarnivore.com please don’t forget to rate the recipe and let me know where you found it in the comments below.
I get inspired by your feedback and comments! You can also join in on the adventures on Instagram @girlcarnivore, Twitter & Facebook. 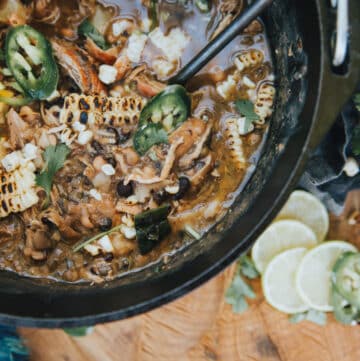 This chicken chili is easily made in a Dutch oven while camping or ahead of time with just a few simple ingredients like roasted pobalnos, broth, and beans. Adjust the heat to your taste and see our tips for thickenig below.
Course: Main Course
Cuisine: American
Author: Kita Roberts
Prep Time15 mins
Cook Time1 hr
Servings: 8
Calories: 268kcal

Deglaze and Add the Liquid

Boneless skinless chicken thighs work great for this recipe too. Store leftovers after cooled in airtight resaleable containers in the refrigerator for up to 4 days.  Reheat individual portions a small pan over low or in the microwave in bursts until heated through.  To cut carbs, omit the tortillas.  To cut more carbs, half the beans and replace them with mushrooms.

This recipe was originally published in the Winter Edition 2021 of Girl Camper Magazine.