I love a good meaty steak, and whether the steaks are beef or pork, anything on the grill is super flavorful and extra delicious. These Grilled Ham Steaks get a brown sugar-mustard glaze that puts them over the top! Easy and delish, you’re going to love this easy dish!

Cooking ham on the grill is super fast because it’s already cooked – all you’re doing is heating it and adding some extra smoke and grill flavor. And this easy dish can be made in two parts, so you can cut down on prep time by making the glaze ahead of time and having it ready to go.

Cut from a whole ham, ham steaks are thick slices of ham. You can get them boneless or with a bone – either will work for this recipe.

Ham steaks are convenient when you’re craving ham but don’t want to deal with a whole ham. Where to find ham steaks? They’re sold in most grocery stores wherever you’d find hams.

You can also cut your own ham steaks by buying a boneless ham and slicing steaks off of it. Pop the rest of the ham into the freezer for casseroles, soups, salads, and more.

The glaze in this recipe is optional but highly suggested! Sure, you can grill a ham steak and eat it, but the savory-sweet and delish glaze puts this ham steak recipe over the top! The glaze makes enough for 2 ham steaks, so double or triple the glaze ingredients if you’re grilling more than that.

How To Make Grilled Ham Steaks With Glaze

For The Grilled Ham Steak

Prep the grill for direct heat by heating a charcoal chimney until the coals are 70% ashed over.

Pour the charcoal into the center of the grill, then cover and open the vents and preheat the grill to about 400-F.

Pat the ham steaks dry, then grill them over the coals (heat source) for 2 minutes. Rotate and grill for another 2 minutes.

Flip the ham steaks and cook another 4 minutes, rotating halfway through.

Brush the ham steaks with the glaze during the last minute of grilling time.

To Make The Glaze

Whisk the brown sugar, mustard, cayenne, sage, and rosemary in a small saucepan.

Simmer until thickened, then season with salt and pepper.

How To Serve Grilled Ham Steaks With Brown Sugar Glaze

Ever wonder what to serve with ham steaks? I’ve got lots of suggestions for you! Try this easy ham steaks recipe with:

Grilled Ham Steaks can be kept in an airtight container in the fridge for 4-5 days. Gently heat the leftovers or use them in tasty recipes like this Leftover Ham and Gnocchi Skillet.

Can you BBQ ham steaks?

Heck yes! An extra bit of smoke and a little char from the grill makes these glazed ham steaks even more delicious!

Do you need to marinate a ham steak?

Is this an easy ham steak recipe?

Yes, it sure is! If you can fire up your grill (charcoal or gas), then you can make this easy-peasy recipe. You can even make the glaze right on your grill if you’ve got a good sturdy saucepan. 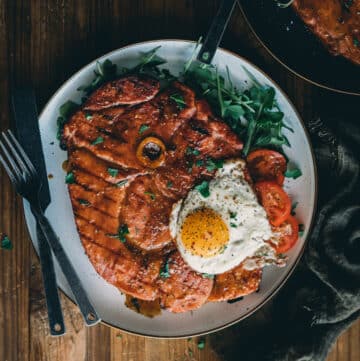 For the ham steaks:

For the Brown Sugar Mustard Glaze:

Ham steaks are already cured and cooked through so you are grilling them to reheat to 140F, adding great grill marks and extra flavor. For a gas grill:
Preheat the grill for indirect heat by turning 2 out of 3 of the burners on medium-high heat allowing the grill to heat up.
Use a smoker box or foil pouch on your gas grill for more smoked flavor! Alternatives & Substitutions:  BBQ sauce also works great instead of the brown sugar mustard glaze. To keep this recipe keto, use Golden Monk Fruit Sweetener and a sugar-free keto-approved maple syrup