Kale Salad? I thought this was Girl Carnivore?? Don’t worry, you’re in the right place. Bacon makes everything better 😉

How do you get a carnivore to eat their veggies? Toss them in bacon fat. Problem solved.
There’s something about a crisp salad filled with dark greens, the snap of seasonal apples, the crunch of pecans, and the flavor of a warm bacon vinaigrette. It’s guilty. It’s wrong. It’s oh, so good. That’s where this Kale & Apple Salad with Warm Bacon Vinaigrette fits in.
But hey, at least you ate your veggies.

Looking for more carnivorous salads? I wouldn’t let you down. It’s not just lettuce in a bowl people!

If you’ve tried my Kale & Apple Salad with Warm Bacon Vinaigrette Recipe or any other recipe on GirlCarnivore.com please don’t forget to rate the recipe and let me know where you found it in the comments below. I get inspired by your feedback and comments! You can also FOLLOW ME on Instagram @girlcarnivore as well as on  Twitter and Facebook. 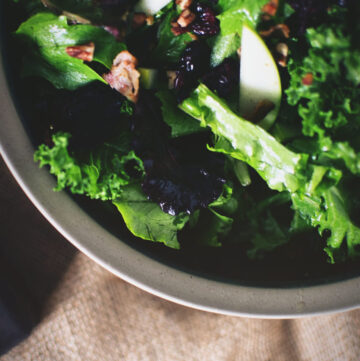