Smoked Corn on the Cob, elote-style takes corn to a whole new level. Hot, smoky, creamy, salty, and spicy, this smoked corn recipe has it all going on! And, it’s crazy easy – jazz up your cookout today with this show-stopping recipe!

This is my secret weapon corn recipe. I pull this one out when I want to impress – when I want everyone to ooh and ahh over it.

But you are the grill master, whipping up briskets and pork for everyone to salivate over while standing around with a brew in hand chatting. It makes you the king of the weekend barbecue, and that is a fun place to be. But are you ready to show them you are a diverse and wise barbecue leader? You can do more than master the smoke ring on a fine cut of beef!

This Smoked Corn on the Cob recipe will do just that. Inspired by a #CharBroilNights event outside Charlotte, North Carolina, the crew of Char-Broil won over the crowd with their Mexican-inspired street corn with the husks pulled back and smoked in the pellet smoker.

I took the idea home and perfected it. This is the kind of recipe that rounds out your grilling prowess and proves that you are more than just a weekend warrior – that you understand how to cook more than meat. Are you ready to impress?

How To Make The Best Smoked Corn on the Cob

This is basically a recipe for elote, or Mexican street corn. Traditionally, elote is grilled, but with a hint of smoke, this corn reaches new levels of taste sensation!

Prepare your smoker for a 2-3 hour smoke and get it up to about 200-F with mild wood.

Carefully fold back the husks on the corn and remove the silks.

Tie the corn husks together with a piece of corn husk and set the cobs on the smoker.

Smoke the cobs for 2-3 hours; your corn will get some nice char in a few spots.

Whisk the mayonnaise, sour cream, cilantro, paprika, cumin, and salt and pepper in a bowl.

Remove the corn from the smoker and slater the hot corn with the mayonnaise mixture.

Sprinkle the Mexican Smoked Corn on the Cob with the shredded cheese and serve with sliced limes.

Smoked street corn (elote) pairs fabulously with so many dishes. Make it a Mexican-themed night with dishes like birria, carnitas, and grilled tri tip, or serve this as a tasty side to Reuben hot dogs or a meaty burger.

Once slathered in the spiced mayo, the cobs won’t keep or reheat very well. If you think you might have leftovers, store the uncoated cobs of corn in an airtight container in the fridge for up to 3-4 days. The mayo mixture can also be stored in the fridge for the same amount of time.

Can you smoke corn on the cob with the husks on?

Yes, but that’s a different recipe. For this one, to get all that spicy mayonnaise and smoky goodness onto the corn, the husks need to get pulled back.

How long does it take to make Smoked Corn On The Cob on a Traeger pellet grill?

At 200-F, it’ll take 2-3 hours to get the corn nice and smoky and tender. It should take a similar amount of time on a Pit Boss or any other pellet smoker.

Is smoked corn on the cob without husks easy?

Yes! This is pretty much a set-it-and-forget-it smoked dish. And, it’s so good, you’ll be back for more! 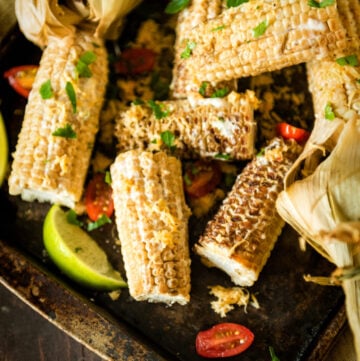 Smoked Corn On the Cob

If you don’t find a chipotle cheddar, look for a pepper jack or other spiced cheese.