Southern This Southern Cola Ham Steak recipe is perfect when you want roast ham but don’t want a whole ham roast! An easy, 20-minute dinner made up of tender ham steak smothered in a sweet and savory brown sugar cola glaze.

This Southern cola ham steak recipe was inspired by something my mom used to make when I was a kid. Something that we used to come running to the table for. Now, I haven’t recreated my mother’s version perfectly yet, but in the meantime, this recipe is a pretty darn good alternative.

This recipe takes 20 minutes to put together, requires just 5 ingredients, and results in tender and flavorful ham and a buttery brown sugar cola glaze. I’ll be honest..after you try this you might just be wishing you did have the whole ham.

What is a ham steak?

Ham steak is a single slice of a whole ham usually cut from the center of a ham roast. It’s pre-cooked and sold as individually packaged slices.

Since ham steaks are thin and already cured, they are quick to cook and perfect for when you’re serving just a couple of people. You get the delicious flavor of roast ham without having to buy a whole ham!

Since the meat is already cooked, all you need to do is apply some heat. Here’s how to prep this Southern cola ham steak:

Heat one tablespoon of butter in a large skillet over medium-high heat, then add in the pork.

Brown the steaks on both sides for 5-7 minutes.

In a bowl, stir together the cola, Worcestershire sauce, and brown sugar.

Pour the cola mixture over the ham, then simmer until slightly thickened (about 3-5 minutes.) Remove from the heat and set aside.

Add one more tablespoon of butter to the cola sauce, stir until smooth, then serve over the finished ham steaks.

It depends. In this case, you do want to buy ham steak that is already cooked so that all you’re really doing is warming it. When you’re looking for one at the grocery store, look for packages that read “fully cooked”, “cured”, or “hickory smoked”.

Why is my ham steak tough?

If your steak is tough then it’s probably overcooked. You’ll brown on each side for 5-7 minutes but not much more than that. If it cooks too long you miss out on that perfect tender texture.

I love to make my ham steak into a complete meal by serving it next to a pile of mashed potatoes, steamed broccoli, and buttery biscuits.

You can also chop it up and use it in pretty much any recipe you want! That means breakfast casseroles, breakfast hash, mac and cheese, salads, stir-fries, frittatas, you name it. Check out my 10 recipes using leftover ham for even more ideas!

Leftover cooked ham steak will last in an airtight container in the fridge for 3-5 days or in the freezer for 1-2 months. To enjoy again, thaw first in the fridge if frozen, then warm on the stove until heated through.

If you’ve tried my Southern Cola Ham Steak recipe, or any other recipe on GirlCarnivore.com please don’t forget to rate the recipe and let me know where you found it in the comments below. I get inspired by your feedback and comments! You can also FOLLOW ME on Instagram @girlcarnivore as well as on  Twitter and Facebook. 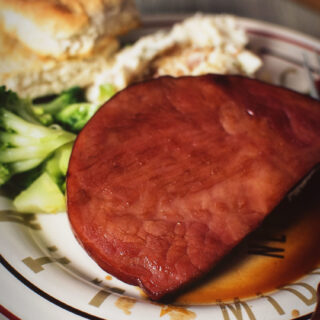 One of my favorite childhood dinners were sweet ham steaks over creamy mashed potatoes. Mom would make this and we would devour it! The sweet cola pan sauce was gravy over entire meal and the ham steaks were a luxury. We never knew it was a 20 minute one pan meal.
Course: Main Course
Cuisine: American
Author: Kita Roberts
Prep Time5 mins
Cook Time15 mins
Total Time20 mins
Servings: 4
Calories: 203kcal

Pair this recipe with creamy mashed potatoes and green beans or broccoli. It also works great with cayenne roasted Brussels sprouts & squash.  This dinner goes quick and rarely has leftovers, but if you have leftover ham steak, store it in an airtight container for up to 3 days. Reheat as needed or dice and toss into scrambled eggs or fried rice for another quick meal.  Dr. Pepper works just as well as regular cola for this recipe. We do not recommend diet sodas for this recipe.  Want things a little more sweet? Add 1 tablespoon of honey to the sauce.