Fire-roasted poblanos are the key to this fresh and vibrant crema that is perfect spooned over carnitas or an abundance of other things! For a quick, easy, and simple upgrade to your sauce game, this recipe is it!

This post was sponsored by Curly’s® BBQ. All thoughts and opinions are my own.

Simple meals are kind of my jam. Really it’s the idea that good food doesn’t take much to make it amazing. And there’s nothing more satisfying than that first bite of a good taco, er, I mean food.

And some nights. I want shortcuts.

Like tonight, when I grabbed Curly’s BBQ Sauceless Pulled Pork that I picked up in the refrigerated meat area of the market (you know, next to the fresh cuts where they also have mac and cheese and other quick solutions ready to grab) out and whipped up some tacos for a friend that dropped by.

They thought I was in the kitchen all day, when really, the simple sauce I used as an add-on to the already slow-cooked pork was all I needed for next-level street carnitas!

This fire-roasted poblano crema is something I whip up in batches and use over and over again. It stores in the fridge for up to 4 days in an airtight container and is totally Keto-friendly! The fresh mildly spice crema is perfect for jazzing up easy carnitas!

What you need for poblano crema:

One of the easiest recipes to make, you only need fresh poblanos, cilantro, garlic (optional), lime juice, crema, and salt.

The hardest step in this recipe is charring the peppers. After that, it’s all tossed in a food processor and pulsed together. Aka, you are 10 minutes to a versatile magic sauce! Your crema game may never be the same. Taco Tuesday will thank you later.

Three ways to char the poblanos

In the oven: Oven roasting may be the easiest way to roast the peppers. Preheat the oven to 425 and arrange the poblanos on a baking sheet. Roast until the skins are blistered 20-25 minutes.

On a gas range: If you have a gas range, simply roast the peppers over a lit burner, rotating as needed, until the skins are blistered evenly all over.

Char-grilling: To add flavor, I char my poblanos over the grill. I let the hickory wood briquets infuse a deep layer before steaming the peppers.

The trick to easy peeling with roasted peppers

After the peppers have charred and are blistered all over, it’s steam that allows the skin to peel off easily. So you need to trap it and allow the peppers to soften for several minutes.

Do this by placing the peppers in the center of a sheet of aluminum foil and folding it shut, sealing all the edges for 5 to 7 minutes.

In a pinch, I’ve even just tossed a plate over a small bowl of peppers to trap the steam in.

Once the peppers have steamed, they will look wilted (for lack of better words) and the skin will peel easily off of them. I find using my hands is the quickest and easiest way to roll the skin off and discard.

Do you have to roast the peppers?

No, you don’t have to roast the peppers, but the sauce will not be the same at all unless you do. One, the peppers become soft when roasting, making them easy to puree. Two, the flavor deepens and becomes richer.

To omit the ‘roasting’ finely mince the peppers and use a heavy-duty food processor or blender to pulse the crema.

After that, you are ready to pulse everything together in a food processor per the original recipe.

What to serve with roasted poblano crema:

If you’ve tried my Fire Roasted Poblano Crema Recipe or any other recipe on GirlCarnivore.com please don’t forget to rate the recipe and let me know where you found it in the comments below. I get inspired by your feedback and comments! You can also FOLLOW ME on Instagram @girlcarnivore as well as on  Twitter and Facebook. 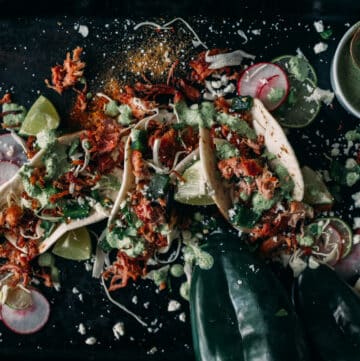 To roast peppers in oven, preheat oven to 4250 degrees F and roast for 20 to 25 minutes.  Alternatively, these can be charred over a gas range as well. The taste will be altered.  Store in an airtight container for up to 4 days.