If you love tacos as much as I do, then these Quesabirria Tacos are going to rock your world! There’s SO much flavor packed into these humble tacos that you’ll never want them any other way! Plus, with ooey gooey cheese oozing out and getting crispy, there’s plenty of crunch to go with the spice.

Birria has taken the country by storm. This humble Mexican stew, traditionally made with goat, has become a common dish all over the place. Not only the stew but the stew meat, which is cooked low and slow in chilis, is used in all sorts of tasty dishes – just like these Quesabirria Tacos.

Imagine a crispy corn tortilla packed with succulent, juicy, and spicy meat with plenty of cheese oozing out and getting crisp in the pan. Can you taste it? But wait, there’s more! The rich sauce is served on the side for dunking, making these fun AND delicious to eat.

The recipe starts with Mexican Birria, a meaty beef stew that I make from a tough and inexpensive cut of meat. Be sure to start the birria at least the day before because it cooks low and slow for hours. Or you could skip the braise and use pulled smoked chuck roast instead.

What Are Quesabirria Tacos?

Queso means cheese, so you guessed it, these tasty beefy tacos are loaded with cheese. I use Oaxaca cheese which is like a fresh Monterey Jack cheese, and it has a mild, creamy flavor and a bit of a salty tang that goes well with these tacos.

You can find this cheese in many grocery stores and for sure at Latin markets. It’s perfect in this quesabirria recipe.

What do you need to make Quesabirria Tacos? You’ll need to start with the meat from the Mexican Birria stew, also known as birria de res. You’ll also need these ingredients for birria tacos:

And because I’m all about flavor, I’m topping these birria tacos with a delish onion topping and chipotle crema. To make these, you’ll need:

How To Make The Best Birria Tacos

Seriously, I’m in love with these homemade birria tacos, and you will be, too! Once you’ve got the birria meat cooked and shredded, this birria taco recipe is easy. how to do it (but for a complete list of instructions and ingredients, please scroll down to the recipe card.)

To make the onion topping: mince the onion and mix it with the cilantro and finely diced jalapeno. Add a pinch of salt.

Make the chipotle crema: blend the adobo sauce with the crema and lime juice.

Assemble the tacos by reheating the beef birria meat (the microwave is fine) and reheat the broth in a small pan on the stove.

Preheat a cast-iron skillet over medium-high heat and brush oil over the surface.

Dunk the tortillas the birria broth to coat them.

Fill the tacos with shredded beef and cheese and fold them over. Fry them until they’re golden brown on one side, then flip them and fry them on the other side.

Top them with the onion mixture and chipotle crema and serve them with hot broth for dipping and wedges of fresh lime.

Make the chipotle crema and onion topping the day before to cut down on cooking time before serving.

Make the shredded beef birria ahead of time

Make a batch of birria, freeze it, and use it later to make tasty dishes like this quesabirria taco recipe. The shredded meat can be added to nachos, stuffed into burritos, and so much more.

Sadly, once these tacos are made, they’re never quite the same reheated. You can, however, get all the components ready, and if you have leftovers of those, you can store them in the fridge.

Is This An Easy Recipe?

Yes, this is an easy birria tacos recipe – especially once the meat is made. If you can make regular ground beef-filled tacos, then you can make these (and they’re so much tastier!) 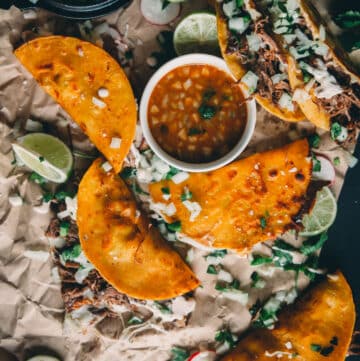 Quesabirria tacos = cheese and shredded meat stuffed tacos. When it comes to taco night this one is an amazing recipe! It starts with my birria recipe and then dunks tortillas in the rich broth before frying them filled with cheese and shredded beef! It's messy, delicious, and may level up your taco night forever.
Course: Main Course
Cuisine: Latin, Mexican
Author: Kita Roberts
Prep Time10 mins
Cook Time15 mins
Resting Time5 mins
Servings: 8
Calories: 737kcal

For the quesabirria tacos

For the onion topping:

To keep this keto, we used homemade tortillas made from scratch at home with psyllium husk. They did not hold up as well to the dunking in broth and frying as the corn did, but they get the job done.
Monterey jack cheese works great if you can’t find Oaxaca.