Big, meaty chops are the star of this dish, and with mildly-spiced rajas con cream on the side along with roasted cabbage, it’s a hearty meal that’s bursting with flavor. I’m a big fan of chops, especially pork chops, and when you pan-sear the pork chops, you lock in all that amazing flavor and caramelize a delicious crust on the outside.

The cabbage can roast right in the pan with the chops, and while it cooks, you can make the rajas con crema.

Grab your skillet, and let’s get cooking!

What Are Double-Cut Pork Chops?

A double-cut pork chop is a thick chop with two bones. Cut from the ribs, these meaty chops aren’t cut twice, but instead, they have two bones. They’re twice as thick as a normal chop which makes them tastier.

I prefer double-cut pork chops because they don’t easily dry out – we’ve all had dried-out pork chops, and they’re no good! Moist and tender, these are by far my favorites, and they make perfect pork chops.

You can get double-cut chops from your butcher or buy a pork loin with the rib bones on and butcher it yourself.

This meal has three parts, but the ingredients are common and shouldn’t be hard to find.

For the double-cut pork chops

For the roasted cabbage

For the rajas con crema

Preheat your oven to 425-F and get a cast-iron skillet heating on the stovetop on medium-high heat. You want it nice and hot but not quite smoking.

Rub the thick-cut pork chops with oil, then season them with salt and my favorite Girl Carnivore Chick Fest Seasoning.

Sear the bone-in pork chops on both sides, and don’t forget to sear the fat on the sides, too! Fat is flavor!

Meanwhile, core and cut the cabbage into wedges. Rub the cabbage wedges with oil and season with salt. Pop them into the same pan as the chops or cook them on a sheet pan.

Once everything is ready, slice the chops, grab a fork, and dig in!

Can this be made with thinner chops?

Yes, tho, depending on how thin, you may not need to finish cooking the pork in the oven.

Pork is safe to eat at 145° F, but it’ll still have a blush of pink at that temperature. Don’t be afraid of pinkish pork – it’ll be awesome! Trust me! Use a good digital meat thermometer to get an accurate internal temperature. Don’t overcook pork chops, or they’ll dry out.

Can this be made with boneless chops?

You can use thick boneless pork chops but watch they don’t overcook. Check out this recipe for perfect thick-cut pan-seared pork chops.

What to pair with pork chops?

We show this dish paired with our favorite roasted cabbage and rajas con crema, but it goes great with creamy mac and cheese, smoked brussels sprouts, deep fried cauliflower, or pork and beans.

All the components of this dish will keep well in the fridge. Package them in airtight containers and store them in the fridge for 4-5 days. You can freeze any leftover pan-fried pork chops, but the crema and cabbage won’t freeze and thaw well. 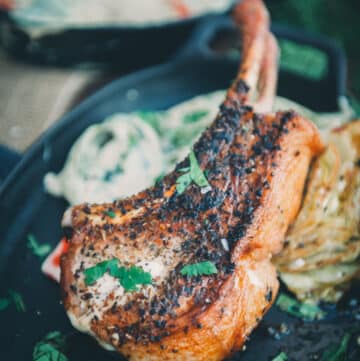 For the double cut pork chops

For the roasted cabbage

For the rajas con crema

Finish cooking in the oven

Cook time will vary depending on the thickness of the chops. Be sure to use an instant-read thermometer to check for an internal temp of 140 before letting the chops rest to 145 and serving.  Pork is safe to eat at 145° F and may have a pink hue.  Recipe nutrition is a complimentary estimate and does not calculate sides.