These stuffed peppers are loaded with an easy chicken tinga and smothered in sauce for a low-carb keto-friendly but loaded with flavor recipe!

If you are looking for a recipe that is loaded with flavor but low on carbs, that is kind of my jam (so much so I have an entire recipe archive for you).

For me, infusing fresh bright flavors into everything is a goal, plays well to my love of Latin flavors, from chicken nachos to cumin-spiced meatballs. And when I had the craving for something different, and was inspired to make this recipe, I figured why not take it a step further.

Could I level up mouth-watering chicken tacos with authentic flavors but keep it easy, quick, and a good choice? Yeah, and this combo of shredded chicken in a homemade tinga sauce stuffed in smokey poblano peppers and covered with crisp local produce totally confirmed it.

What is chicken tinga?

I have had chicken tacos, chimichangas, chicken enchiladas, and chicken chilaquiles, but what the heck is chicken tinga?

Basically, it’s a sauce made of tomatoes, chipotle chiles, onions, and cooked chicken. Its a versatile filling perfect for tostadas, tacos, topping sopes, and more.

Tinga translates to shredded or torn meat. The chicken (or sometimes pork) is cooked and then shredded and coated in the sauce, just like in enchiladas.

For the cilantro crema, you will need coconut milk (or almond milk depending on your preference), fresh lime juice, and cilantro if you really want to earn bonus points.

You can substitute the chicken breast for chicken thighs if you prefer. Just make sure there it is boneless skinless.

Poblanos have a rich taste, espeically when charred. If you are worried about this for milder palets, sustitute with bell peppers and omit the step to char.

This is one of those recipes that looks hard, because of the plating, but isn’t. Promise.

It’s a few simple steps. Start by making the sauce and cooking the chicken in the sauce. While that is cooking, roast the sweet potato (if you are using it).

Char the outsides of your poblano peppers so they are nice and roasted and then steam them to peel the skins off. Don’t forget to scoop out the seeds.

And then assemble the meal. Fill the poblanos with the shredded chicken and top with the remaining sauce. Bake them for a few minutes until it all comes together.

This recipe works as a stand-alone for myself with no sides needed, however you could pair it with rice and beans or cauliflower rice and a salad.

Can you use leftover chicken?

Yes! Instead of starting with raw chicken, use leftover chicken shredded (or leftover smoked chicken – even better) and cut the cooking time down.

Make the tinga sauce as instructed adding the shredded leftover chicken instead of the chicken breast and simmer until just heated through about 7 to 10 minutes.

If you’ve tried my Chicken Tinga Stuffed Peppers Recipe or any other recipe on GirlCarnivore.com please don’t forget to rate the recipe and let me know where you found it in the comments below. I get inspired by your feedback and comments! You can also FOLLOW ME on Instagram @girlcarnivore as well as on  Twitter and Facebook. 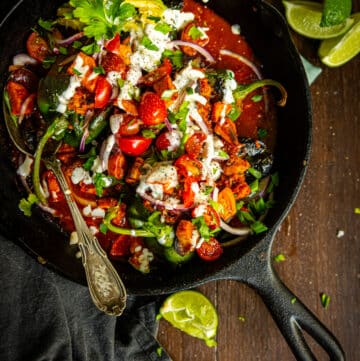 For the Chicken Tinga

For the Stuffed Peppers

For the Cilantro Crema

Cook the Chicken & Make the Sauce

The cilantro crema can be made up to 2 days ahead of time and stored in the fridge. You can make the chicken tinga in a slow cooker. Simply place all of the chicken tinga ingredients in a slow cooker and cook on low for 4 to 6 hours. Follow directions after this step to make the stuffed peppers.  Store leftovers in an airtight resealable container for up to 3 days.  Reheat in a cast-iron skillet or on a baking sheet in an oven preheated to 350 for 10 to 15 minutes.  Kicking it on keto? Cut back the sweet potato or omit it entirely to cut down on the carbs. Recipe works with or without it.  Swap out leftover chicken as a great way to cut down on time for this recipe. Simply make the sauce and omit the cooking time. Simmer shredded leftover chicken to heat through and stuff the peppers and finish the recipe as instructed.