Tortas hamburguesas comes together (almost) as quickly as those grocery market boxes and knocks them clear off the shelves.

Ground beef. It’s like the be all end all American staple. Between “Helpers”, skillet meals, sauce packets, and kits, there’s not much mom can’t make on the quick with a pound or so to feed a hungry family.

Well, throw it all away.

Because this recipe comes together (almost) and blows away any pre-made store bought version. This is a weeknight burger the way things are meant to be. Tortas Hamburguesas. (There’s even magic bacon hidden inside of the patty.)

Mexican tortas are wonderful sandwiches typically with a Hispanic flair to them. For all you folks that might assume France or England, the US of A have the best sandwiches, I urge you to try tortas.

Next time you are at your favorite Mexican restaurant, or perhaps that best kept secret food truck that makes tortas and check one out. Pretty much sandwich magic, served hot or cold depending on the contents.

But, if you feel like cooking in… Then I definitely have you covered! This tortas hamburguesas recipe hits the right notes, lightly spicy, but nice use of bacon, and cilantro.

What is a torta?

“Torta” sports several meanings so good to know the difference. In this case, Torta refers to the Mexican style of sandwich. But torta can also refer to break, or cake. The term even is used for omelettes in the Philippines.

In Mexico, two types of bread are typically used.

Looking for more ways to elevate ground beef to the next level? Check out some of my Over-the-Top Burger Creations!

If you’ve tried my Tortas Hamburguesas, or any other recipe on GirlCarnivore.com please don’t forget to rate the recipe and let me know where you found it in the comments below. I get inspired by your feedback and comments! You can also FOLLOW ME on Instagram  @girlcarnivore as well as on  Twitter and Facebook. 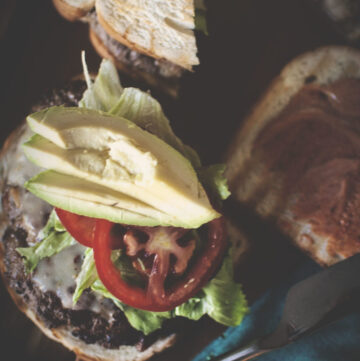 This was a burger that became a patty melt that is amazing no matter what roll you put it on. Between the bacon loaded patty and the sauce, this may be heaven.
Course: burger
Cuisine: Mexican
Author: Kita Roberts
Prep Time1 hr 15 mins
Cook Time15 mins
Servings: 4
Calories: 691kcal