Stew isn’t dainty, it subdues the rumbling deep from your gut like a leviathan quickly sinks even a war-hardened battleship. Stew is the cold-weather meal that we crave.

There’s soup… And then there’s stew. Soup comes in a dainty little cup. It’s served before a meal to tide you over until everything is good and ready. It’s that charming first course that just builds up anticipation to the main course. Then there’s stew, it’s hearty Viking big brother. Stew isn’t dainty, it’s the hefty foodstuffs that you can count on to sustain you through the harshest nights. It subdues the rumbling deep from your gut like a leviathan quickly sinks even a war-hardened battleship. Stew is the cold-weather meal that we crave. Leave the soup for the fancy 6-course meals. This loaded veggie beef stew is an all in one savory feast.

There is nothing like a stew to warm you up on a cold day. Try some of these recipes out to warm your crowd!

If you’ve tried my Slow Cooker Loaded Veggie Beef Stew Recipe or any other recipe on GirlCarnivore.com please don’t forget to rate the recipe and let me know where you found it in the comments below. I get inspired by your feedback and comments! You can also FOLLOW MEon Instagram @girlcarnivore as well as on  Twitter and Facebook. 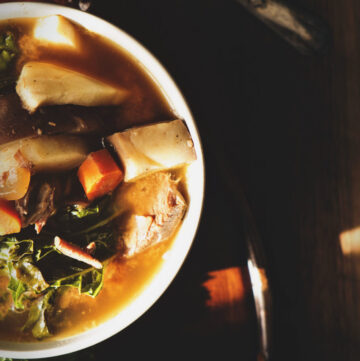